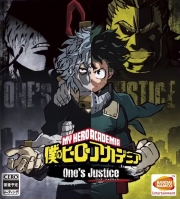 Can I Run My Hero One’s Justice

Can You Run It?

My Hero One’s Justice is an upcoming fighting game based on the popular Manga/Anime My Hero Academia. Despite its Japanese origins, the world is a massive tribute to the American superhero genre. The fighting style of this game will closely resemble the fighting that takes place in the Naruto: Ultimate Ninja Storm series - a strong emphasis on timing and maneuvering on a 3D battlefield. More information about My Hero One’s Justice will be updated as it is made available.

Here are the My Hero One’s Justice System Requirements (Minimum)

What Will Run It?

Below are some gaming computers with images that show how many games will run on each. Each computer was tested against the minimum and recommended requirements of over 8,500 of the latest PC games. Click here for more options.